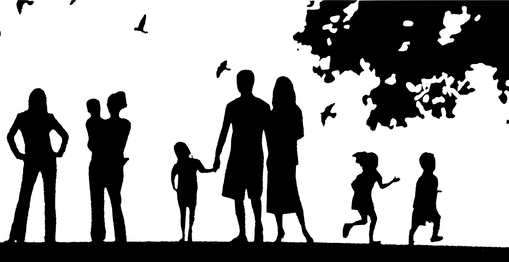 Our Deacon Board
​February 2020 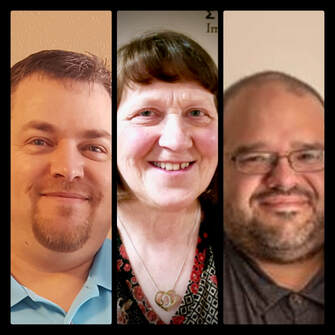 We are privileged to have three wonderful deacons:
J Doyle Dagnan, Rozie Wax, and Chris Arends.
J Doyle Dagnan loves playing with his kids, does a lot of coordinating or doing facility & grounds maintenance and has a long-time God passion that includes daily time with God.
Rozie Wax is steady in her Godwalk, has been with the church since 2000, reads the Bible daily, has been with the Lord since 1977, chairs our security team & our hospitality team, has oversight of custodial issues and is who we text with our prayer requests (if you have a request text her at 308-760-3160). She asks great questions and listens intently.
Chris is often with his kids, has assisted repeatedly around the church, works hard and recommitted his life to Christ a few years ago. He has oversight of church finances, banking & benevolence.
​The deacons not only have care and oversight of the church in its business, but also partner with the pastor in spiritual ministry and direction. 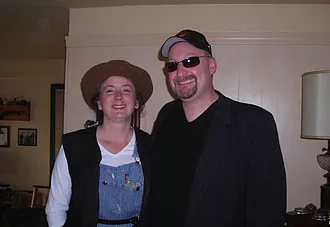 Pastor Jim's favorite book: "The Insanity of God" by Nik Ripken, favorite movie: "The Matrix".  He began in ministry in 1987, came to know Jesus as  in 1974, and his crazy story is that he drove a schoolbus to Mexico and had it confiscated.

Brook's favorite books: "Little Princess" by Francis Hodsen Burnett for identity as a princess of God, and Little Pilgrims Progress for grasping some of the issues in our God-journeys, favorite movie is either the "Lord of the Ring" series or "Fried Green Tomatoes".  She came to know Jesus in 1965, and her crazy story is that she accidentally wore her pajamas to school one day under her normal clothes. (She doesn't do mornings well and loves coffee for a reason.) Together, they have had three sons. Two are living, with sons/wives serving Christ and 5 grandchildren.

Jennifer's favorite book is: 'This Present Darkness' and her favorite movie is 'Lord of the Rings'. She accepted Jesus into her heart at age 5, and came to understand Jesus better as a teenager. Her crazy story is that her family responsibility to retrieve the family's emu and bring him home. He was big and fast and would run 2-3 miles from the house. She would have to risk an arm breaking, wrap her arms around his neck and awkwardly bring him back, even as he would break away from her. She had to to corral him as a 16 year old even though she had the help of a group of men one time because she knew how to stop him...and hasn't forgotten the look on their faces when they tried to assist. She has earned the title of 'Emu Wrestler' even though she hasn't travelled far beyond Nebraska.
​
Francisco's favorite book: "How's Your Soul" by Judah Smith, and his favorite movie is '42" about Jackie Robinson. He came to know Jesus at age 12. His crazy story is that his dad wanted one of his children to be born in Mexico. The entire family was there for the birth when the doctor came out and said 'who do you want to live, your wife or your child?' His dad, not knowing the unborn child, chose his wife. When the doctor brought out Francisco, the family began crying, thinking his mother was dead, until the doctor said 'Go see your wife in the room. They both survived.' The family came closer to God through this. 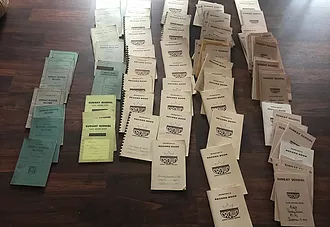 To the right is pictured a record of our Sunday Schools, since maybe 1939..?? That is a significant representation of who we are......The July 7th, 1940 Sunday School record mentions Pastor C.E. Thurmond,  also many others....Women and men who taught classes or sent their children to class with, for example, .12 cent offerings. Then there is listed, in another example, a 'Sister Gloria'. We see her name but maybe will only know her impact on lives in heaven,...perhaps we know those who got to be in her class, or grandchildren of those in her class. Who knows how many of her class went to war to fight in WW II?  On the other end, in more recent years,  a 1993 class record book , we see another example of who Calvary Assembly is... we see that Rosalyn Detwiler faithfully taught her class of 1-3 children Dec 1992- May 1993, sometimes (often?) with only perhaps one child showing up to nursery class.  We may wonder how her prayers over those babies impacted the lives of children who now, years later might be adults? Calvary Assembly of God is us- the group of those who gathered to give their lives sacrificially in prayer and service day in and day out. We are those who clean the church, attend meetings while holding down two jobs, give offerings to support missionaries, we teach Bible studies or children's classes, whether our classes are large or small, we are those who buy a coffee for someone else in the line behind us, or pull weeds or sit with the lonely. We love Jesus and have a commitment to learn from Him that extends beyond time, and a reward that is beyond our ability to know it in this life as we love and serve as He loved and served. The Bible says 'we will reap in due season IF we do not give up', Galatians 6:9. We wanted this paragraph to be a shout out to all the saints who have sown into other peoples lives willingly, and even often under stress- just reading the names, we now can see children who have grown up experiencing Jesus and committing their own lives to a furtherance of HIS kingdom. Who is Calvary Assembly of God? It is the assembly of real time saints and sinners chasing and being chased by a very big God, working out our own 'stuff' in fear and trembling. Oh, one more thing.... we love coffee. So, come join us and have some!